The Moral of the Little Americana Hen

Grandmothers will go to any length to give her grandchildren things they wish for.  On Saturday, my granddaughter told me that after three years, she has one surviving chicken.  The hen she called her “special needs” chicken, because she was born with a birth defect, needed a playmate.  Since I had recently gotten rid of all my chickens, I didn’t know how I was going to fulfill her wish. 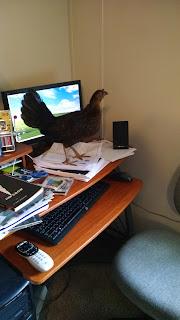 On Sunday, George and I went through the McDonald’s drive-thru in Forsyth to get a biscuit before church.  There we saw the hen in the picture above darting in and out of cars.  I saw two cars parked in the lot, side-by-side, obviously doing a child exchange.  I could tell these people were not from around here.  I saw the little hen take off in a fast run and head straight for a lady who had exited the car.  I knew chaos was about to ensue!  The little hen was only asking for help, but the lady was squealing, jumping and flailing her hands.  That caused the rest of the occupants to run to her aid.  I yelled out the window to them, “It’s okay.  Our McDonald’s serves fresh chicken.”  She ran under one of the cars and I watched as they yelled and waved their arms at her.  I was enjoying the show!

It gets better.  A door was open and the little hen jumped in their car.  I could tell the last thing they would do was touch the hen.  I yelled again, “Do you need help?”  That was met with a resounding, “Yes!”  I reached inside the car and picked her up without incident.  As I walked away, they were still in shock and I knew that was one visit to Forsyth’s McDonalds they would never forget.

With the hen cradled in my arms, I realized I had a problem.  What am I going to do with the hen while I’m in church?  Of course, she had to go to church with us!  I didn’t actually take her inside, although I thought about it.  I gave her water, cracked all the windows and left her in the car.  After the service, I returned to the car.  She was so grateful she had given me a present…an egg!

I was excited to tell my Granddaughter that I had gotten her a beautiful Americana breed hen.  She knows me so well she didn’t even seem surprised when I told her the great rescue story.  She was more impressed with the fact I took her to church.  She immediately named her “Church Lady.”

This is more than just a sweet story.  It has a moral.  In his column last week in the Reporter, Mr. Curlee spewed hate towards my Little Red Hen I had written about in my previous column.  He said she was like all Democrats; moochers and leeches who want everything for free.  As I watched this Americana hen happily settled in her new home this morning, I knew she represented other Americans who get lost, displaced and frightened.  All they need is a “hand-up.” When she tried to get help, she was met with rejection and would surely have died if someone had not intervened.   This hen is not a Democrat or a Republican.  She is an American.

Posted by Marilyn Langford at 8:05 PM