Published:
Thursday, January 15, 2015 6:37 AM CST
High Falls voted to secede from Monroe County during a secret conference call of unidentified residents this week.  This shocking move was prompted by the “Hail Mary” pass by the County Commissioners to stack the deck on the Monroe County Development Authority, thus denying anyone even vaguely familiar with High Falls a seat at the table.  This snub of High Falls was quickly considered “the South against the North.”

THE participants in this secret meeting were united in their views that High Falls is the most beautiful part of Monroe County. Considering the beautiful lake, the clean river, the already busy High Falls State Park, it was agreed that with just a little strategic planning and development, the potential of High Falls is unlimited.

THE over-whelming concern by the residents is the perception that tourists exiting I-75 have of High Falls.  That perception is that High Falls does not have a pot-to-pee-in.  Literally.  There are no bathrooms for those traveling to High Falls.  Why can’t the Development Authority offer incentives for a travel center at Exit 198, just as it does for prospective businesses in Forsyth and south Monroe?

IN A cleverly disguised voice like that of an inebriated person, one participant seemed only concerned with hogs.  He repeatedly remarked that the lack of concern for development of High Falls located in “North” Monroe is because we don’t have any “hams.”

DURING the meeting, it was argued that Butts County did a great job in saving Indian Springs by changing what amounted to an “eye sore” into an interesting and lovely place to visit.  The idea to merge into Butts County was quickly nixed because no one wanted to be from a county called “Beautiful Butts.”

ALTHOUGH the number of residents participating in the vote is unknown, the vote to secede from Monroe was unanimous.  However, it was soon decided that a full secession from Monroe County would cause a few small problems, like water, roads, and law enforcement.  In a compromise vote, it was decided that High Falls should create their own development authority.  The first action of the new High Falls Development Authority would be to bring a Starbucks/Bait and Tackle shop to the area.

READER, the above column is my attempt to write satire.  Of course it’s not true!  At least some of it. Satire is the use of exaggeration, ridicule, and shame to prompt people or governments to improve.  The fun of reading satire is that you have to figure out for yourself what is true and what is satirical. Satirical writings have recently ignited the cyber attack on Sony by North Korea and the shooting deaths of the staff of the French magazine Charlie Hebdo in Paris. We cannot allow terrorists to deny our right to a sense of humor.

Marilyn Langford of High Falls writes a regular op-ed column in the Reporter sharing the liberal perspective on events.
Posted by Marilyn Langford at 10:11 PM No comments:

Georgia First to Execute Prisoner in 2015

The Death of Andrew Brannan

I’m so riled up about so much this week, I couldn’t possibly write about it all.  The tomfoolery under the gold dome has surpassed my expectations in just the first week. Even I was surprised that House Bill 1 regarding medical marijuana, the one I commended Representative Peake for in my column a couple of weeks ago, was dead on arrival.  Not surprising is that it appears the “Religious Freedom Preservation Act “ will dominate the session, unless a more discriminatory bill is introduced that brings even more professional homophobes to the Capitol.  I decided that I would have plenty of time to write about those subjects, so I decided to write about a dead issue.

Let’s celebrate!  Georgia is finally first in the nation for something.  Georgia holds the proud position of being the first State in the country to execute someone in 2015.  Andrew Brannan was executed on Tuesday, January 13, for the shooting death of a police officer in 1998.  “So what?” you say, “He deserved it.”

That’s what I thought too, until I learned that Andrew Brannan was a highly decorated Viet Nam War hero.  He suffered from debilitating post-traumatic stress (PTSD).  He was diagnosed and rated 100% for PTSD by the Veterans Administration (VA), in 1990.  That was long before PTSD was a household word and even the VA used the rating sparingly. Brannan returned from Viet Nam where he witnessed unspeakable things, but his mind stayed on the battlefield.  Andrew Brannan was sick.  His service to our country and to us as a people, made him sick.

I’m not suggesting that all veterans who kill someone should get a free pass.  What I’m saying is that PTSD should be taken into consideration when the death penalty is on the table.  In Mr. Brannan’s case, it was barely mentioned at his trial and his psychiatrist treating him at the VA was not called upon to testify at the trial.  I feel this was an injustice, not only to Mr. Brannan, but also to all veterans.  However, since I am a firm believer in our justice system, I felt that ultimately the final decision makers; the Georgia Board of Pardons and Paroles would right the wrong.

I’ve been following the case of Andrew Brannan very closely now for a few months.  I have first hand knowledge of this case.  Someone very close to me is a veterans’ advocate and highly experienced in working with vets suffering from PTSD.  This person was part of the team fighting to have Brannan’s death sentence commuted to life in prison.   All of the attorneys and advocates involved in this case worked tirelessly for this veteran pro bono because they also believe in our justice system.

My faith in our justice system has now been tested.  The clemency hearing was held on Monday morning, January 12. Board Members most probably rushed off to attend Governor Deal’s inaugural festivities being held just across the street.   After all, who could blame them?  They were there on official business with all expenses paid; why not attend the celebration? That evening, the Board announced they upheld the death sentence for Mr. Brannan.

The very next day, Tuesday, Brannan was killed by lethal injection.  Andrew Brannan AND  the heroic police officer he shot were both casualties of war.
Posted by Marilyn Langford at 8:52 PM No comments:

Playing Politics with our National Security


I liked this picture so much, I just had to share it.  See post Mexican Standoff, for the story. 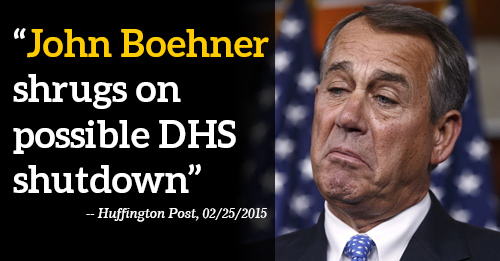 Posted by Marilyn Langford at 5:53 PM No comments:

WHEN I retired over a year ago, George and I hoped to travel and visit with relatives and friends we had neglected all those years because we worked and didn’t have time.  In 2014, we did get to travel.  A lot.  We did get to visit with family and friends. Lots of them. However, it was not joyful occasions like we had imagined.  Be careful what you wish for.

THIS PAST year has been the suckiest ever for my family.  I’m sorry for using that distasteful word but it is the one that describes it best.  That word says it all.  During the span of a year, I have lost three brothers, a sister-in-law, a brother-in-law, and a life-long friend. That seems pretty darn sucky to me.  I have a selfish reason for telling you this and it’s NOT to make you feel sorry for me.  It’s because when I write about something it is a cathartic process for me.  When I tell my story, it helps me move on.  It provides me emotional healing.

I AM fully aware that a bad 2014 is not exclusive to my family and I.  In fact, it was a sucky year for all of Monroe County as we were all touched by the loss of Officer Norris.

2014 WAS a sucky year for Democrats.  The “Hope” is still here but the “Change” is coming much too slow.  I had visions of a new progressive Georgia but it was not to be.  At least not this election year.  It was a sucky year for Republicans, too, because whatever happens now, they HAVE to own it.

HAVING GOTTEN all this off my chest, I feel much better now.  My optimism is returning.  Thank you Will Davis for providing this platform to me in 2014, to freely share my views, opinions, gripes, and now my personal difficulties.  That doesn’t suck at all!

Marilyn Langford of High Falls writes a regular op-ed column in the Reporter sharing the liberal perspective on events.