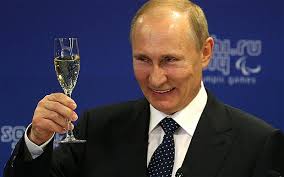 Last Wednesday was the fourth of July, the day we celebrate Independence Day for our country.  That’s why I thought it ironic that while we were celebrating this great day in our history, seven U.S. Senators and one Representative were whooping it up in Russia with Putin’s muckety-mucks.  They met with the crème de la crème of Putin’s government.  Putin!  One of the most autocratic, despotic and cunning leaders in the world, second only to North Korea’s Kim Jong Un. (Actually, that is debatable.)  But, it’s the two leaders that Trump looks up to and holds in high regard.

THIS TRIP to Russia by these Senators, paid for with our tax dollars, was not announced prior to the meeting.  In fact, Senator John Kennedy from Louisiana stated, “We didn’t want to cause waves prior to the meeting with the Russian delegation.”  That tells me these senators knew what they were doing was questionable.  My question is, why would these Senators want to sit down and buddy up to the people who interfered in our 2016 election? The day the Senators met with the muckety-mucks, the Senate Intelligence Committee reaffirmed the report from the U.S. intelligence agencies.  The Senators’ defense was “We talked to them about that and said it can’t happen again.”  Give.  Me.  A.  Break.

IN CASE you are keeping an “enemy of the people’s list,” here are the names of the Senators and Representative that chose to spend Independence Day in Russia:  The delegation was led by Richard Shelby, AL.  The others were John Thune, South Dakota, John Kennedy, Louisiana, Jerry Moran, Kansas, John Hoeven, North Dakota, Steve Daines, Montana, Ron Johnson, Wisconsin, and Representative Kay Granger, Texas.

THE SENATORS said they hoped to start a “new day” with Russia ahead of the Trump/Putin summit in two weeks.  This “new day” will be exactly what Russia wants and needs.  It’s what Trump wants too, but it’s not what this country needs.  Putin has a master plan.  He wants to be the leader of the world.  Trump is paving the road for him.  Just a short 19 months ago, the United States was the most trusted and revered government in the world.  We’re dropping fast.  Trump has disrespected and alienated our long-time allies in favor of tyrannical governments.  He is playing right into Putin’s hands.

FOR EXAMPLE.  We all know that mother’s breast milk is the healthiest food for a baby.   It builds their immune system and is easier on their stomachs, just to name a few reasons.  A few months ago, the United Nations-World Health Assembly was held in Geneva. Representatives were there from nearly every country. Ecuador had a petition to present that contained the wording that members of the World Health Assembly would “protect, promote, and support breastfeeding.” This has been a stated mission of the organization for 40 years. The passage of this bill was a given- until the delegation from the United States’ Health and Human Services wanted to take those words out of the petition.  The U.S. took the side of big infant formula manufacturers who wish to increase their exports world-wide.Surprised?

WHEN ECUADOR refused to delete those words, the U.S. delegation threatened Ecuador that Washington may punish them with steep trade measures and may take away the military assistance they have been provided.  Ecuador backed out.  Advocates of the petition tried to find another country to present the petition to the Assembly with no luck. They feared retaliation from the Trump Administration. Finally, Russia steps up and says “We’ll do it.”  They did, and the measure passed.  The U.S. did not threaten Russia. I wonder why.  Russia received much praise and the United States looked like jack-asses in the eyes of all the countries involved in the World Health Assembly.  This action and others like it being taken by the Trump administration weakens our standing in the world each day.

THE “NEW DAY” will come in two weeks when Trump and Putin meet for the big summit in Geneva.  Like Trump did with Kim Jong-Un, he plans to meet with Putin one-on-one, alone, with no note-takers. During the North Korea summit, we know he gave Kim Jong-Un a major concession, no more training exercises in the Korean Peninsula in return for scrap-damn-doodle.  Plus, even our government is reporting that Kim Jong-Un is still pursuing nuclear weapons at secret sites.  The Korean summit was a joke, just as the Russian summit will be.

WHAT IS Trump going to give Putin? We may never know unless Russian Television tells us.  My best guess is sanctions will be lifted that were put in place in 2014 when Russia annexed Crimea.  (Annexed in this case is a nice word for forcibly taking another country). You remember the big “adoption” meeting that wasn’t actually about adoptions but sanctions?  I’m sure Putin can’t sleep for worrying about all the Russian orphans that he’d like American families to raise.  Or, will Trump give Putin something more substantial like Syria?  After all, Trump owes Putin bigly for getting him elected.

THE BIG question is, what will Putin give Trump?  Probably scrap-damn-doodle.  One thing’s for sure, it won’t be that original video tape.

Posted by Marilyn Langford at 9:00 AM