How Georgia Could Decide the Senate 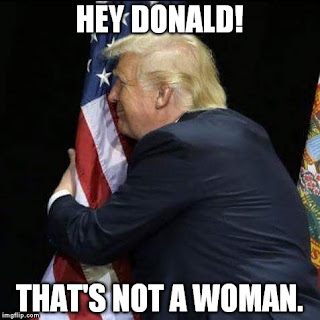 I promised myself that I would not write about Donald Trump this week.  I’m sick of him, you’re sick of him, even my dogs are sick of him.  However, I was sucked in by the hype of Trump’s big announcement on Saturday of his 100-day plan and I thought we would find out his policies finally!  WRONG!  WRONG!

This speech was delivered in Gettysburg, PA, the site of Abraham Lincoln’s renowned Gettysburg Address.  Honest Abe is spinning in his grave now.  Trump stole many of his words, but it sounded much better and believable when Abe spoke them.

For the first twenty minutes of his big policy speech, he told us what he really wanted us to know.  His policies took a back seat to his continued insistence that the election is “rigged” and how mean, nasty, and ugly the Media, Hillary’s campaign and his fellow Republicans have been to him.  He topped it off by saying all the women are liars who made allegations against him and he will sue every one of them (all eleven of them) as soon as the election is over.  I have lost track of how many people and entities he has said he would sue.  I like what the New York Times said, “We look forward to it.”

We all know by now that Trump’s method of operation is to threaten or bring lawsuits.  In his three speeches Saturday, he stood strong and proud and threatened these women who had the courage to speak out against the suing machine.  Trump brags about his many, good lawyers.  He should talk to them.  First, when you make yourself a candidate for public office, your character as it relates to fitness and qualifications for office is on the table.  Your prior actions and conduct is fair game.  Trump knows this!  In a 1999 interview with Chris Matthews, he told him that he could never run for President because of his history with women.  He said, “People want me to [run for president] all the time … I don’t like it. Can you imagine how controversial I’d be? You think about [Bill Clinton] and the women. How about me with the women? Can you imagine?”

Second, Trump is threatening to sue the ladies for defamation of his character.  A defamation case is balanced between a person’s First Amendment protections of free speech.  Trump will have to prove that his reputation has been hurt.  He is a man, who has spent his lifetime building his reputation as a rich cad, bragging about his sexual escapades and ripping off his contractors.  He is on a video describing his sexual assault.  If anything, the ladies solidified the reputation Trump has sought throughout the years.

Third, in political campaign defamation cases, the candidate must show that the campaign is his “profession” or “business”.  Trump has repeatedly told us that he is not a politician; that he is a businessman.

Trump promised when the ladies started coming out of the woodwork that he had “proof” they were lying and “I will release it soon.”   We’re still waiting.  If he had one iota of proof, he would still be waving it in our face.  Good luck with your lawsuits, Donald!

In my Unfair and Unbalanced column last week, I wrote of the threat of a Cyber-War and how Russia’s threat 55 years ago “We will bury you without firing a shot,” was coming to fruition.  I assure you, I am not a prophet. However, last Friday, the largest cyber attack we’ve ever had, took down large segments of the Internet and millions lost service.  On-line commerce was severely affected by millions of lost revenue.  This hacking was only a test.

We may have a surprise in Georgia on election night.  No, not that Hillary will win Georgia, although that could happen.  Johnny Isakson and Jim Barksdale may be in a run-off for the Senate race.  The current polling shows Isakson ahead with 47% of the vote and Barksdale 32%.  Before you laugh, consider the Libertarian candidate, Allen Buckley has 11%.  Then consider, Isakson has to have 50% + 1 to win without a run-off.  Katie bar the door if that happens!  Control of the Senate could come down to a run-off election right here in Georgia.  All eyes in the nation will be upon us and there won’t be an available hotel room in the state.  That would be good for our economy, so vote for Barksdale!

It’s Halloween time!  Got your candy yet?  We had a trick-or-treater one time about five years ago.  I was so excited.  After ten years of living here, we finally had a trick-or-treater.  Actually it was three in a group, pitch dark, during a torrential downpour.  Don’t know where they came from.  All I had to give them were two-week old apples.  That reminded me of when I was young and we’d surprise elderly people while trick-or-treating.  All they ever had were apples.  I don’t like apples.  I like candy.
Posted by Marilyn Langford at 10:15 AM