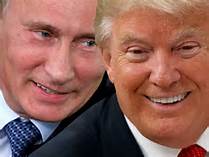 We now have concrete proof; we have something we can see and feel.  The Russians ARE coming and since we have a President-Elect that pretends to be as blind as a bat, it will happen sooner, rather than later.

I read the unprecedented Assessing Russian Activities and Intentions in Recent Elections Intelligence Report, not once, but several times.  I know enough about classified and non-classified reports to know if it did not happen, it would not be said.  I trust the intelligence agencies in our country to know the hard evidence is there.  I worked for the National Security Agency for twelve years. I know their professionalism. I know each individual employee considers it an honor to work for this agency that provides the utmost in security for our country.  You can sleep because they are on the job.  The same is true with the CIA, FBI, and the lesser-known agencies.  I know first hand these are very dedicated employees who are passionate about their work and totally self-less.  They get no “thanks.” They can’t talk about their work—they can’t even tell anyone where they work.  They only know within their heart they are serving their country. To hear an American President mocking these dedicated public servants disgusts me.  In fact, to denigrate these agencies is unpatriotic.

I urge you to read this report in its entirety.  Google it.  Don’t take my or Trump’s word for it.  Until then, I will spare you the “government-eze.”  The Report is five pages and discusses how they determine the degree of certainty of the information.  The report explains the analytic process and how it is determined who did the hacking.  Finally you get to the meat of the report—Key Judgments.  Interspersed in the key judgments are interesting tidbits like no voting machines were compromised. We learned that the Republican Party Headquarters was indeed hacked.  It was made clear that Putin ordered the hacks.  Also certain was Putin had a clear preference for Trump and helped make his chance possible by discrediting Hillary Clinton and contrasting her unfavorables to Trump’s favorables.  Their intelligence covert operations, like cyber attacks, were followed up with overt efforts by Russian Government Agencies, State funded media outlets, third party intermediaries, and paid social media users, known as “trolls.”  The Russian Military Intelligence (GRU) provided the hacked documents to Julian Assange of WikiLeaks for release.

We all followed the campaign, right?  So, let me tell you how it works.  An email from Hillary is released by WikiLeaks refuting what she said earlier.  It has a salacious title, Hillary Lies!  That same day, Trump would repeat it at his rally and say, “Hillary lies!  She lies!”  Then Alt-right news sources, like Breitbart or Matt Drudge take it from there and repeats, “Hillary lies!”  The trolls join in on social media sites frequented by right-wingers.  The next day, the next, and months later, it is the same routine, with a different headline.  By the time they are through, Hillary’s character has totally been assassinated.  And that, my friends, is one way Russia influenced our election.

But wait!  I knew all that!  What’s the big deal of this report?  Like many, I thought that was the end of the report the first time I read it.  The second time I read it, I started questioning the page numbers. I saw a page entitled Annex A. As I read on, I realized that Annex A had little to do with the hacking or influencing this election. When I finished reading, that’s when my abject horror (my word of the week) kicked in!  That’s when I realized that the heads of all these Intelligence agencies were telling us something that we needed to know, but since Trump’s handpicked intelligence leaders are taking over, this was the last and only opportunity they had to get the message out to America.  That’s when my abject horror kicked in.  The Russians are no longer coming!  They are here!

Annex A is seven (7) pages exclusively reporting the emergence of RT, a television network tied to, funded by, and controlled by the Kremlin.  RT was formerly named Russia Today, but when ratings showed it failing, the connection to Russia was removed to make it more palatable to international viewers.  Putin’s appointed editor-in-chief Margarite Simonyan, speaks candidly about the channel’s “importance to the Kremlin as a messaging tool” and indicates a “Kremlin-directed campaign to undermine the U.S. Government and fuel political protests.”  The network has a very substantial social media staff with paid “trolls.”  A United Kingdom report states that RT was the most-watched foreign news channel in the UK. According to the report, RT has expanded its programming in the U.S. and highlights criticism of U.S. short-comings in democracy and civil liberties. This is a warning to us!  Don’t ya’ll remember I told you that Trump’s National Security Adviser, General Mike Flynn worked for RT?  And I thought FOX News was bad!

So much more to say, so little space.  I leave you with this.  Trump said about the hacking, “I know things nobody else does.”  Yep, I bet he does!

Posted by Marilyn Langford at 9:44 PM